USDA released the April update on the Corn and Soybean markets.

World Corn production for the year 2020/21 is estimated at 1,137 Mio Ton, slightly increasing compared to the previous forecast, with positive changes in the European Union (including the United Kingdom), Pakistan and Ecuador. Production in Argentina was revised downward, due to the drought conditions caused by the climatic phenomenon La Niña.

Following an expected increase in Corn consumption, global ending stocks were revised downwards, with an expected change of -6.3% compared to the previous year.

The average selling prices from April 1st to 15th recorded in West Iowa (USA) stood at $218/Ton, +5.4% compared to the previous month.
The average price of Corn recorded during the same period in Bordeaux (France) was €210.2/Ton, slightly decreasing compared to the average of March 2021.

Current prices in Bologna for Italian corn range between €233/Ton and €239/Ton.

Global ending Soybean stocks for the 2020/21 season have been positively revised compared to the previous forecast, while remaining at levels well below the 2019/20 season (-9.9%). 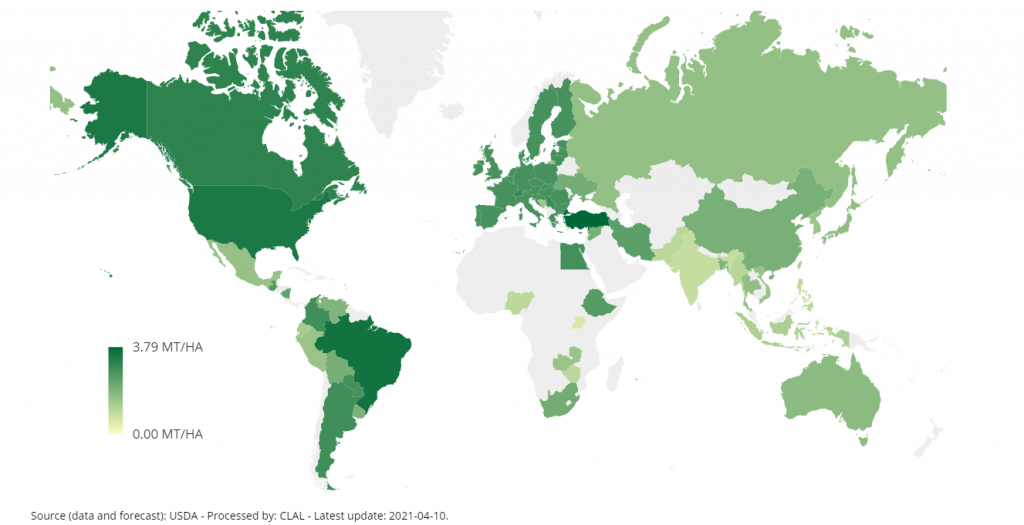 The average selling prices of Soybeans from April 1st to 15th in the USA were $547.7/Ton, an increase of + 0.1% compared to the previous month.

Soybean prices in Italy continue to rise. The latest quotation in Bologna records an average price of €693/Ton, with a variation of + 6.1% compared to the previous quotation.