The European Commission has opened the sales by a tendering procedure of skimmed milk powder (SMP) out of public intervention stocks. The first partial invitation to tender shall end tomorrow, on 13 December 2016. Regulation, from the Official Journal of the European Union, is reported at the bottom of the article. 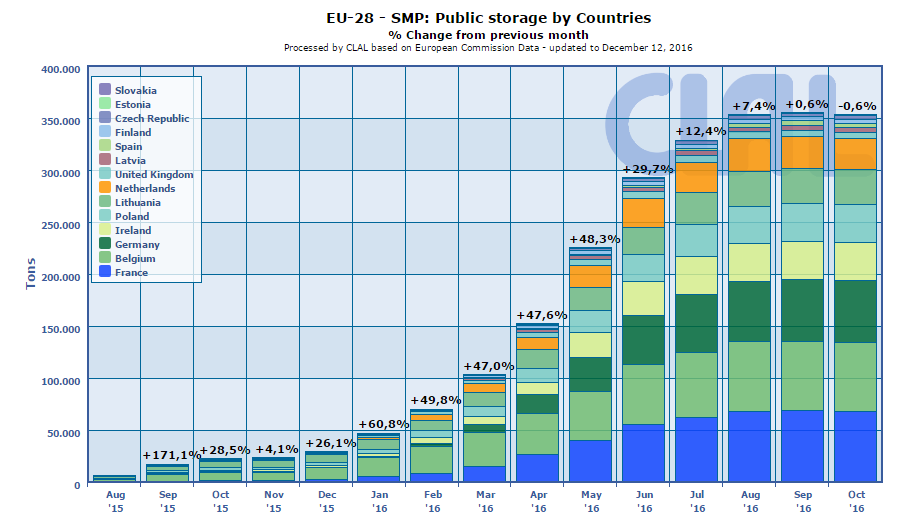 The first amount released is the SMP entered into storage before 1 November 2015, that is 22.150 t of SMP [refer to the October data in the chart], which corresponds to 6.28% of the total amount of SMP stored as of October 2016.

At international level, the dairy sector is following this procedure and expects the impact on the market. At the moment, there have been no adverse effects, and the SMP price at the GDT auction increased, also after the European Commission decision to sell part of the stocks. After all, starting from June the EU milk deliveries were lower than 2015, and the amount of SMP released by the European Commission may to some extent compensate for the lower SMP production due to the reduction of milk supply.

In the regulation on the tenders opening procedure, the European Commission states that: “Given the current situation on the skimmed milk powder market in terms of price recovery and the high level of intervention stocks it is appropriate to open the sale of skimmed milk powder from public intervention by a tendering procedure“. However, the guests from New Zealand at the CLAL Dairy Forum (October 2016) have clearly expressed their doubts about the subsidies and intervention of the EU policy, declaring that this process could lead to market distortions and can be destructive to the whole sector.

0 comments on “EU SMP stock release: what might happen?”

1 Pings/Trackbacks for "EU SMP stock release: what might happen?"