Milk prices on farm are rising: quickly in northern Europe, but at a slower pace elsewhere in EU. In the first half of 2017, they should stimulate milk production that slowed down substantially in the end of 2016.

Milk production has declined substantially in most European countries. Many dairy farmers, facing cash flow -if not financial- difficulties, have generally meet their commitment to reduce their deliveries taking the European support of 14cts/l of milk not delivered. European milk deliveries have started to reduce in June last year and have fallen 3,5% under their 2015 level in the last quarter of 2016 according to our estimates. Deliveries for the whole 2016 year would however be marginally higher than in 2015 (+0,4%). 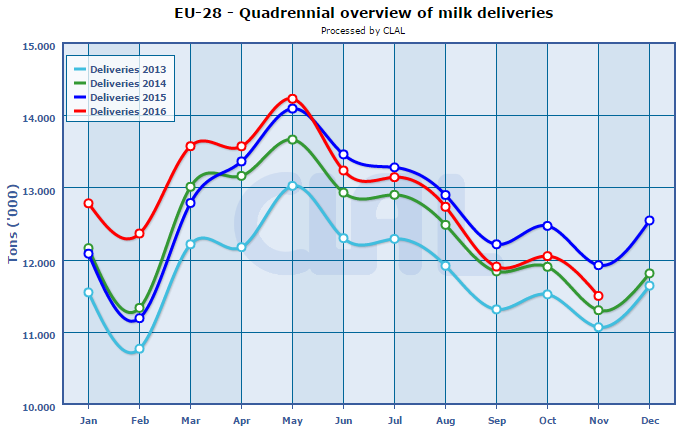 Deliveries have dropped sharply in France and the UK

In France, deliveries have dropped by more than 7% /2015 in the last quarter of 2016, after just a moderate decline from April to August. The annual deliveries are thus lower by more than 2%, back to 2011 and 2012 levels.

Many dairy farms bear the brunt of both the poor milk prices and the poor forage year. Having low and/or poor quality forage stocks, they reduce the feeding of their flock. They are constrained to limit the purchases of feed, because of bloodless cash flows and consequent debts to suppliers. The decline in the number of dairy cows has not accelerated in the last few months: in early December, there were 0,7% less cows than in 2015. But the national herd is now very close to his lowest point at this stage of the year registered in 2012.

The slowdown in production is deeper in the South of river Loire and the East of France. It’s more moderate in the Western and Northern part of France. Normandy has even maintained its production at 2015 levels on the first 10 month.

Deliveries have also slowed down in Denmark, Sweden and Ireland where the dairy farmers have anticipated the drying up of cows to beneficiate from the European support to voluntary reduction of deliveries. They have globally stopped the increase of national herd. The culling of dairy cows has remained high until early winter.

In Germany, deliveries were down by 4% /2015 in the last quarter of 2016, despite the milk price rebound. It has dropped in the Eastern Lander (-7% /2015 in September and October), that make 22% of the milk production. There, dairy farms have reduced significantly their herd (-5% /2015 according to the inventory of November). It has decreased in a less extent in Western Lander (-3% in September and October), in the North as in the South. In these Länders, the dairy herd has only decreased by 0,8% /2015.

Deliveries finally stabilized in the Netherlands

In the Netherlands, deliveries have stabilized in late 2016 after a long period of expansion. Annual production has thus increased by 7% over 2015 according to our estimates, as much as the year before. In spite of the increase in milk prices, dairy farmers will have to reduce production in 2017. Otherwise, they may lose the advantage of the national derogation to the Nitrates Directive that allow to spread between 230 and 250 kg/ha of organic nitrogen (instead of 170). To avoid that, they have to quickly reduce a large surplus of phosphorus waste.

Finally, milk production has maintained quite well in Poland, Spain and Italy where it had little increased after the removal ok milk quotas. 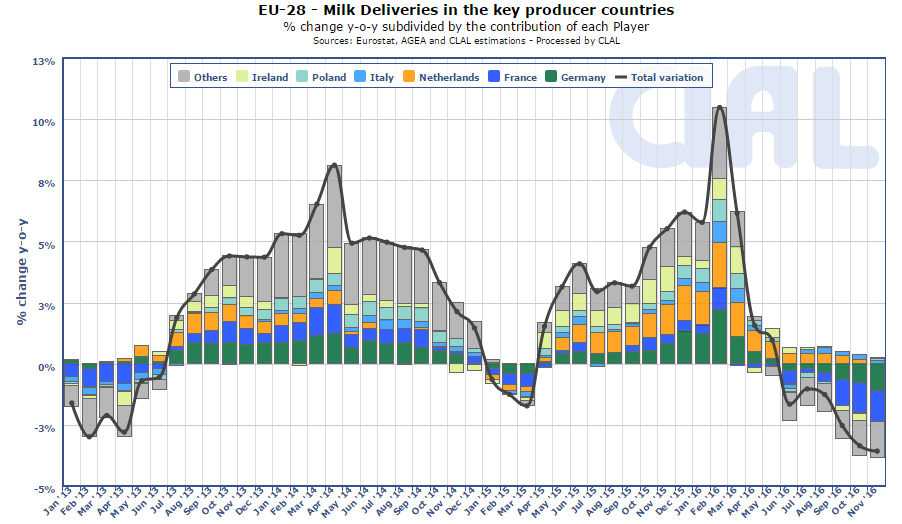 Expected Recovery in European production in the first half of 2017

While European production has decreased by 3,5% in the last quarter, the other World main exporting countries have also experimented reduced dairy production : -5% /2015 in October and November in New-Zealand, -11% in Australia and -15% in Argentina. On the other hand, the US production is getting even more dynamic since the autumn (+2,4% /2015) thanks to increased milk yields.

CLAL.it – Milk production in the Northern and Southern Hemispheres

In 2017, the milk price recovery should progressively stimulate European production that will gradually recover and reach its 2016 level next spring. For some countries, in particular France and Ireland, the intensity and speed of the production recovery will highly depend on climatic conditions and forage production.

Dairy experts and operators, who cooperate with CLAL in the information to the whole dairy chain.