Record soybean production forecast for Brazil in the new season

Brazil is expected to overtake the United States as top Soybean producer, with a share of 35% due to a significant production increase (+5.1% compared to the current season). Projections for the United States are for lower planted and harvested area, and Soybean production in estimated at -15.4%. Soybean supply is slowing also for Argentina (-5.4%).

Global Soybean export, down 1.9% in the current season, is expected to recover in the new season (+0.7%), due to higher exports for the United States. 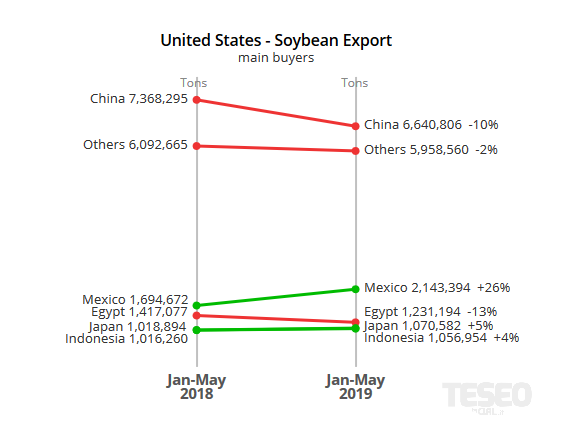 China, the main world Soybean importer, is expected to increase its imports in the new season: +2.4% compared to 2018-19 season.

In the first four months of 2019, Italy increased Soybean imports +16.8%, compared to January-April 2018. The United States and Brazil are the main suppliers, more than offsetting the sharp decline in purchases from Canada.