Brexit: which effects for the dairy market? 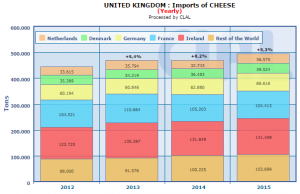 Membership in the EU is binding on the UK to place a duty on imports from New Zealand and Australia. This limit would fail with the UK exit from the EU, and in this case the historical relations between the UK and the two Oceanic countries (Commonwealth) could facilitate the trade between these countries.

In this scenario, if the differential between Oceania prices and the European prices will remain, the UK could find cheaper to import from New Zealand.

CLAL.it – Competitiveness of the butter prices, in the UE, the US and Oceania before and after application of the duty 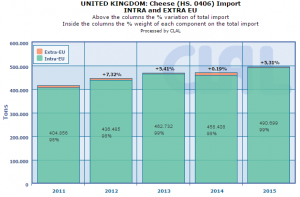 The EU Countries could then be affected by the UK exit, and particularly Ireland, which is on one hand the main supplier of Cheese and Butter, on the other hand finds in the UK its largest customer for these two products.

How will Brexit affect UK export? Imports to EU countries would be subject to duty, unless bilateral agreements will be reached.

To follow the evolution of this market in real time, the CLAL Team suggests to analyze the dedicated Slideshow on www.clal.it/en, accessible from the menu RESEARCH & ANALYSIS →  SLIDESHOW → Focus UK

After having analyzed the possible scenarios, and having overcome the emotional impact of Brexit, it is desirable that the parties find a compromise.

CLAL.it – Current prices (€) in the US, Oceania and the UE

CLAL.it – Current prices ($) in the US, Oceania and the UE