Chinese dairy figures for the month of December 2017 confirm a positive trend y-o-y both in volume and in value. Imports of cheese and WMP slowed down (respectively -19.4% and -40.5%), but recorded satisfactory level of price growth (+12% and +28.4%).

Looking at the overall numbers of 2017, the role of China on the global chessboard clearly emerges. Essential, even for the West’s economies.

The Cheese balance is also positive: +11.2% in quantity and +18.7% in value. The growth margin of the Cheese export is high, but it is necessary to introduce Italian products to Chinese consumers, in order to make them aware of the value of the Made in Italy.

Even the decision by the Chinese Ministry of Finance to cut import tariffs on 187 consumer goods, including some cheeses, can certainly be exploited to grow.

In some fields, the dominance of New Zealand and Australia can be challenged by EU producers. 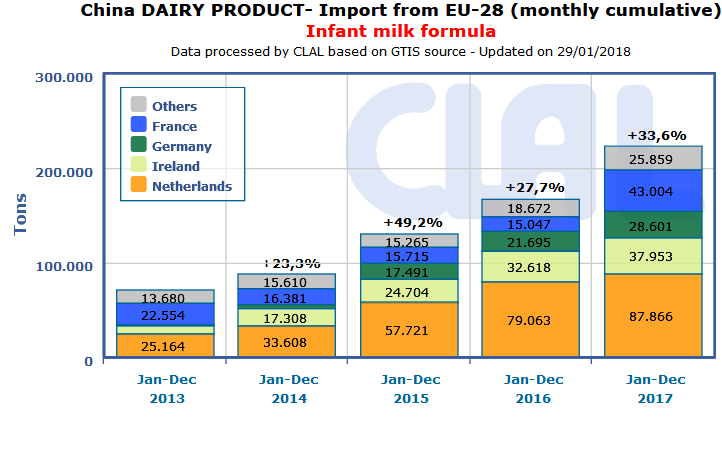 This is the case, for example, of the Netherlands, leader in infant milk export, with a share of 29% and an export growth of 11% in 2017.  In this context, also France has grown considerably, positioning its market share (14%) behind New Zealand (16%), with an increase in volumes exported in 2017 of 186% compared to the previous year.

France and the Netherlands grow respectively by 15% and 27% in the export of Whey Powder, placing themselves after the United States, the undisputed market leader with a market share of 55%.

New Zealand monopoly remains the export of WMP to China, with a market share of 92%, followed by a 3% of Australia, France, the U.S. and the Netherlands. 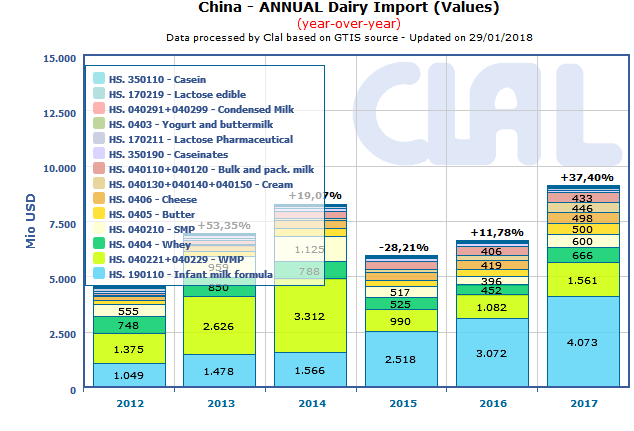