USDA Forecast of March shows signs of stability in the Corn and Soybean markets. World production estimates have been revised slightly upwards, positively influencing the final stocks, which, however, remain at significantly lower levels than the previous year.

USDA released the March update on the Corn and Soybean markets.

World Corn production for the season 2020/21 is estimated to increase slightly from the previous forecast, due to positive changes in India, South Africa and Bangladesh. The estimates for the main producers, USA, China and Brazil, remain unchanged.

The estimate of global ending stocks confirms a decrease of -5.1% compared to the previous year.

In Italy, Corn prices are substantially stable. Current prices in Bologna for Italian corn range between 229€/Ton and 235€/Ton.

The global ending stocks of Soybeans are revised slightly upwards, although they remain at significantly lower levels than the previous year (-12.8%). The March forecast estimates an increase in final stocks for China and Brazil, almost entirely offset by the decrease expected for Argentina.

The production estimates for the current year are revised upwards in Brazil for 1 million tons, and downwards in Argentina for 0.5 million tons. In Argentina, in fact, the harvest could be affected by the drought conditions recorded in recent weeks. 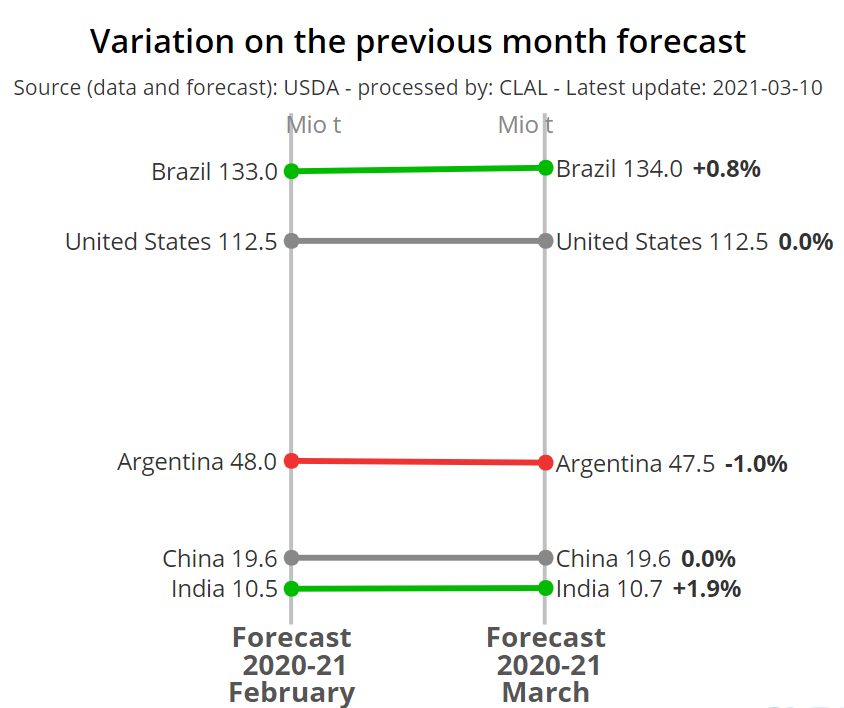 Average US Soybean selling prices from March 1st to 11th increased by +2.7% compared to the previous month, settling at $548.8/ Ton. Increases in local currency soybean prices also occurred in Argentina and Brazil, mainly due to inflation.

The average price of Soybeans quoted on 11 March in Bologna increased significantly to € 546/Ton, + 4.4% compared to the previous price.

For more details on the dairy, agricultural and swine markets, follow us on our websites CLAL.it and TESEO.clal.it