The dairy exports of the European Union are going through a period of uncertainty. Between January and August 2018, exports fall in quantity (-2.1%) and in value (-5.1%), compared to the first eight months of 2017.

Export in Milk Equivalent (ME) drops 3.8%, after the 2017 boom (+19.04%), with negative exports to Southeast Asia, Central and South America and, to a lesser extent, North America.

If we analyze the trend of individual dairy products, it emerges that the world is looking for high added value and highly specialized products in Europe. In fact, the best performance of the EU-28 are for Infant milk formula (+14% in quantity and +4.8% in value), with China, Hong Kong and Saudi Arabia among the main importers, for Caseins (+24.4% in quantity and +0.7% in value), with the U.S. and Mexico the first buyers, and Lactose for pharmaceutical use (+4.4% in volumes), with China, New Zealand and Japan among the top importers.

EU exports less Cheese in January-August 2018: -0.8% in quantity and -1.2% in value. The United States, the first country of destination, lost -7% y-o-y in eight months. Japan partially compensates, growing by +13%.

The slowdown in exports, combined with an increase in EU deliveries, could influence supply and demand in the future, with effects also on EU-28 prices. 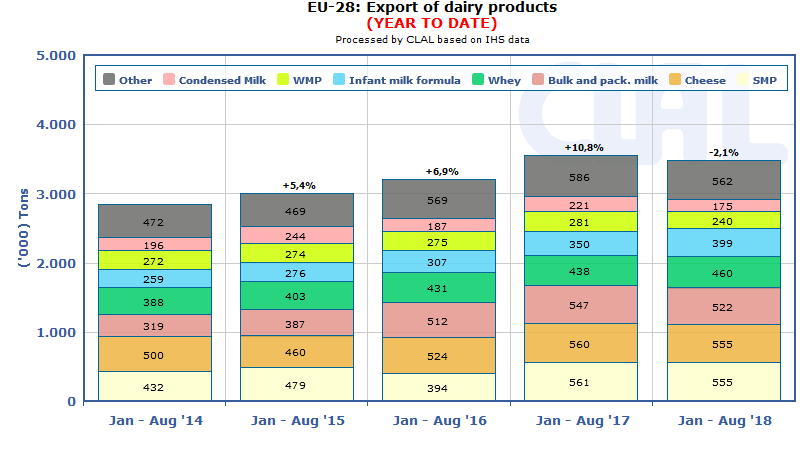 Posted in Dairy export, EU, None