Cheese raises: a strategic product for the EU

The EU-28 dairy export, in October, recovered in quantity (+12.5%) and in value (+6.8%). The export of Cheese, strategic product for EU due to the intrinsic dairy tradition, improved. The main target markets are those with the highest spending power: United States, Japan, Switzerland and Australia.

In particular, an increase in Fresh Cheese trend was reported: +20.4% in quantity and +16.2% in value, thanks to significant growth in South Korea (+103%), but also in Japan, United States, China and United Arab Emirates.

Thanks to the particularly competitive prices of Skimmed Milk Powder (SMP), EU exports increased by 40.9% y-o-y in quantity and 22.7% in value. Algeria remains the first destination market, with a share of 15% of total EU exports, but the focus is the recovery of imports from South-East Asia: China, Indonesia, Vietnam, Thailand, Malaysia.

Milk and Cream exports (respectively +15.9% in quantity and +14% in value) recover, with China accounting for 43% of the market share. Behind China, the increment is driven by the import of three African countries: Angola, Libya and Mauritania.

Positive scenarios also for specialized productions such as Whey and Lactose powder for pharmaceutical use, the latter even growing by 47.6% in quantity and 25.9% in value.

The October boom, however, is not enough to reverse the current year trend of dairy products exports from the European Union. The January-October 2018 is indeed negative compared to the same period of the previous year both in terms of quantity (-0.3%) and in value (-3.5%), even if the stable export in Milk Equivalent (ME) suggests not to be excessively pessimistic.

When it comes to quality, the EU-28 potential is unrivalled. 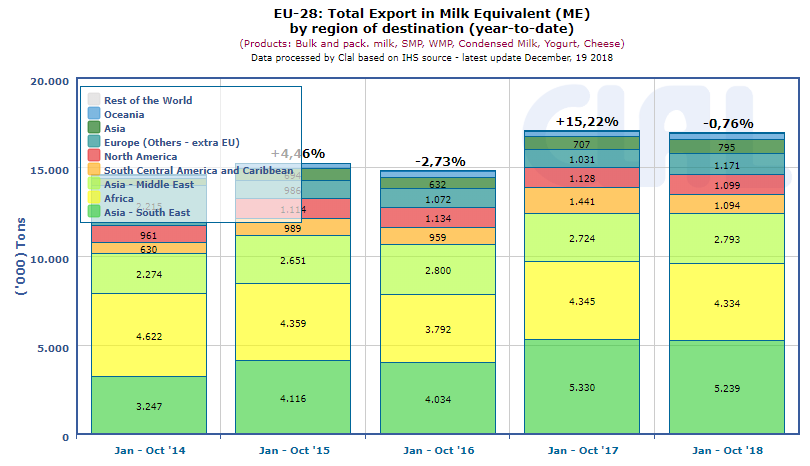