The growing taste for Italian dairy

With 3.023 billion euro, the dairy sector accounts for 7.4% of Italian agri-food exports.

The scenario is positive for all types of products, confirming that the great reputation of “Made in Italy” has also been able to spread the Italian cheeses.

The best performances in terms of volumes are scored by Pecorino and Fiore Sardo (+31.47%), grated or powdered cheeses (+31.72%), and fresh cheeses (+20.90%), but the positive sign is also for Gorgonzola, Grana Padano and Parmigiano Reggiano and for the whey powder, which is the most exported product in the world, with 442,081 tons in 2017. 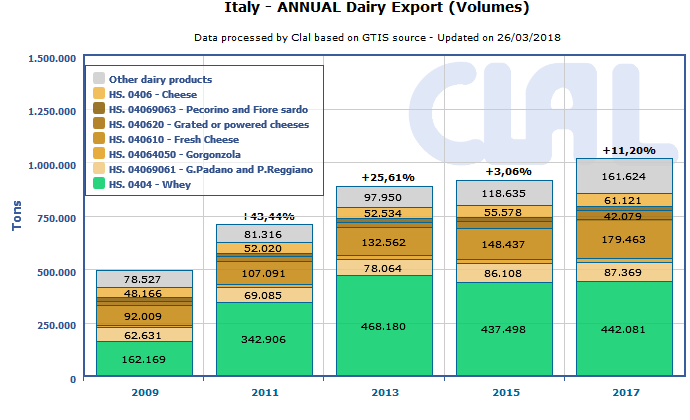 In terms of value, exports of dairy products increased by almost 18%, proving that the strong appeal of Made in Italy finds appropriate recognition also in terms of price.

Above all, it means that the target countries have been identified in those where per capita income and consumer purchasing power are higher.

Grated or powdered cheeses increased sales by 32.72%, a signal that traces the positive trend of products-services. Just think that their export value in 2009 was 368 million euros; in 2017 it approached 800 million.

Growth of 23.48% for fresh cheeses and 12.88% for Grana Padano and Parmigiano Reggiano. The two hard PDO Cheeses increased again after four years substantially without significant increases. Slighter, but still satisfying, the performance of Gorgonzola: +8.90%. Compared to 2009, it almost doubled the turnover over the border.

The good performance of dairy exports in 2017 was achieved without particular aggregation strategies and without identifying ambassadors who are also users of the product such as, for example, the cooks. 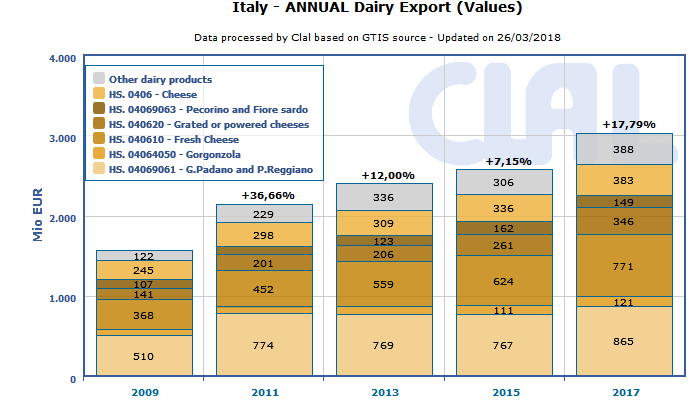