India plans to grow exports of dairy products (and not only)

With cow’s milk production expected to increase in 2022 (+2.1%) as well as other types of milk such as buffalo, sheep and goat’s milk (+ 2.4%, source USDA), India aims to export to Countries in SouthEast Asia and Middle East and Northern Africa.

India is a subcontinent with an area almost 11 times larger than Italy, self-sufficient in the dairy sector (100.2%), with a per capita consumption of drinking milk which in 2021 rose to 54.1 liters per capita. Despite being one of the most populous countries in the world, with about 1.4 billion inhabitants, Indian agri-food exports amount to about 50 billion euros overall, about the same as Italy.

India’s ambition is to establish itself as an exporting country, in particular of Butter and other fats, mainly destined for the United Arab Emirates, Saudi Arabia, Indonesia, Oman, Bahrain, Morocco and Qatar, Fat Filled Milk Powder (FFMP), mainly exported to Bangladesh, Sri Lanka, Malaysia, UAE, but also US and UK, SMP, which mainly finds its way to Bangladesh.

Between January and February 2022 total exports of Indian dairy products grew by 41.6% compared to the same period of the previous year, which grew by 82.9% compared to January-February 2020, despite being a period held back by the spread of Covid, which claimed several victims in India.

For the first time, in 2022, Indian dairy exports exceeded 30,000 tons in the first two months of the year.

Follow the updates
of the Indian dairy sector
on CLAL.it > 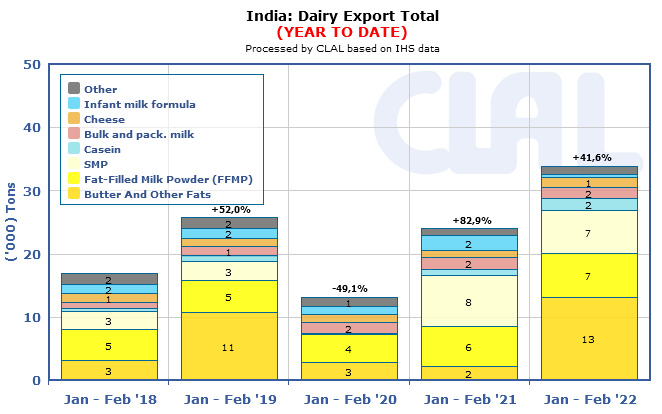 Thanks to the favorable climate season, cereal crops are encouraging exports, which have been consistently on positive tracks since the beginning of 2020.

Among the main countries of destination for rice we find China, Nepal, Iran, Benin, Ivory Coast and Sri Lanka, while the Indian wheat trade routes are Bangladesh (with a market share of 50%), Sri Lanka, Indonesia, South Korea and Philippines.

Follow the updates
of the Indian Cereal Export
on TESEO > 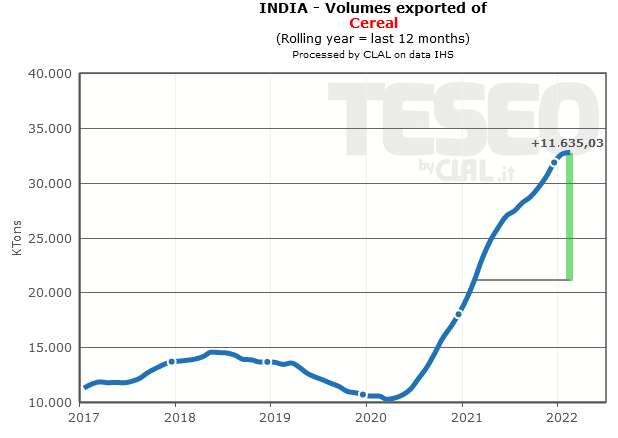 The agrarian reform, strongly contested by farmers, was filed last November as India aims, on the one hand, to strengthen  the technologies for agriculture development and the spreading of solutions for agri-food products’ conservation. On the other hand, the Country aims to accelerate infrastructural growth, a key element for the transport of foodstuffs both within India and abroad.