BUTTER (82%): prices moved lower at the bottom of the range; New Zealand prices are weaker than in Australia.

CHEDDAR CHEESE: prices moved slightly lower at the top of the range; very quiet market; with the end of the production season near, most stocks are committed and moving to customers; available milk is tending to flow into other products.

WMP: prices are weaker; competitive pricing from the EU continues to be a factor; not many buyers are looking to cover needs.

Demand for Australian dairy products from traditional large Asian customers has become sluggish due to what is perceived as a slowing of China’s economy. Carryover inventories for many processors are said to be weighing on markets as well.

SMP price competition among US, Europe and Oceania 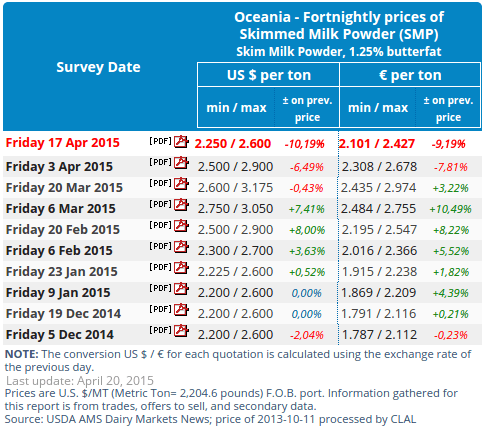