World Soybean Production is expected to grow for the new season, driven by the United States and Brazil, while China is confirmed as the main destination for the export of Soybean.
Soy prices increased in November in the main global markets.

Michele from the CLAL Team illustrates the Soybean market trend in the following video. 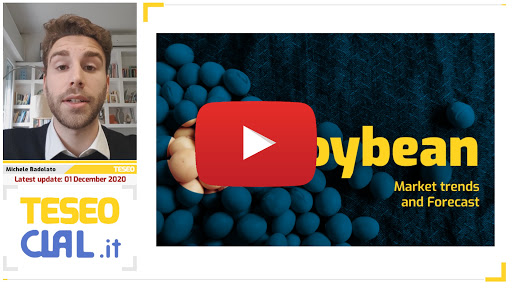 Soybean Global Production for the season September 2020 – August 2021 is estimated to decrease slightly compared to the previous forecast, but it is still increasing by +7.7% compared to the 2019-20 season (USDA Forecast).

Production is expected to grow for the two main global players, Brazil (+5.6%) and the United States (+17.4%). Production estimates are positive also for Argentina and the European Union.

Global Export of Soybean for the 2020-21 season is estimated to increase slightly, +1.9% compared to the previous season, driven by the positive trend of US exports (+31.2%).

Exports from Brazil and Argentina are expected to decrease. The October data show a reduction in exports, respectively -50.9% and -91% compared to October 2019.

The main destination for the Soybean export remains China, which accounts for about the ⅔ of the total import. For the 2020-21 season, China is expected to increase its Import by 1.5%, reaching 100 Mio Tons. In October, China imported about 8.7 Mio Tons of Soybean, +2.5 Mio Tons compared to October 2019.

The European Union for the period January – September 2020 imported more than 12 Mio Tons of Soybean, recording an increase of +7.7% compared to the same period of 2019. However, for the 2020-21 season, the European Import is expected to decrease by -1.3%.

Soybean prices continue to rise in the main global markets.
The average November price in Argentina is $341 per Ton, +7% compared to the previous month and +36.4% compared to November 2019. The trend is positive also for the United States, with the USDA estimating an average seasonal price increase by over 20% for the 2020/21 season.

In Italy, the price of National Soybean has increased significantly. The average price of November in Bologna is 416€ per Ton, +7.3% compared to the previous month and +22% compared to November 2019.

Register to our websites CLAL.it and TESEO.clal.it to be always up to date with the latest information about the dairy, the agricultural and the pork market.

Thank you for following us, from Michele Badolato and the CLAL Team. 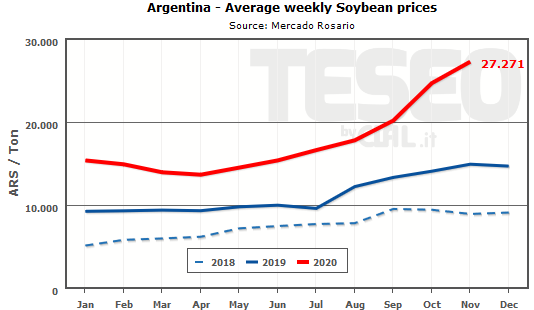