Home › Soy › Soybean: Prices on the rise in the new season

Soybean: Prices on the rise in the new season

Soybean total use is continuously growing, and given the lower expected production, ending stocks should reach 96.67 Mio Tons (-12,34%).

Soybean production in Brazil, expected to be the world’s main producer in the 2019/2020 season, should reach 123 Mio Tons (+5.1% compared to 2018/2019 season). United States’ production is decreasing (19.6%) due to the diminishing of U.S yield of land, especially in North Dakota and South Dakota.

Global export of Soybean for 219/2020 season is expected almost unchanged compared to the previous season. Higher predicted exports from Brazil and U.S. (overall +1,5%) compensate for the expected decrease from Argentina. 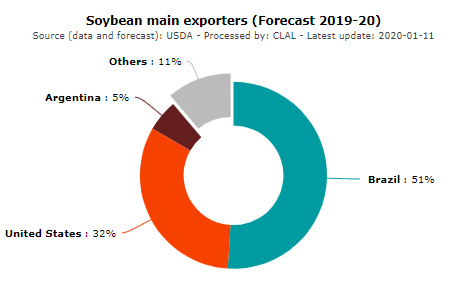 In the first 10 months of 2019, Italy increased Soybean imports: +29% compared to January-October 2018. Italy has recorded an overall variation of +84.2% of the imported volumes from U.S. and Brazil, which remain the main suppliers.