What is the milk self-sufficiency rate in China? Do Chinese people have a sufficiently structured supply chain to meet the needs of domestic consumption of more than 1.4 billion people? These are two questions that arise in light of the import trends of dairy products that continue in August, with an increase by +2.9% in volume and +1.7% in value.

The import of dairy products between January and August of this year increased by +9.4% in quantity and +10.8% in value. In milk equivalent (ME), the acceleration in the first eight months of the year is +24%.

The EU increased the SMP export by +84.9%: Germany, France, Finland and Ireland are the top four EU exporters.

Is Italy absent? No. Italy has also conquered an export niche in the cheese segment. Overall, China increased the quantities of cheese purchased abroad by 5.4%, mainly from New Zealand (60% market share and +20% increase in the first eight months of 2019 on a trend basis). The EU-28 also grew: + 9% in quantity, with Italy standing behind Denmark and France among the exporting countries of the European Union.

However, while other EU countries are improving their trade performance, Italy is slowing down: -2.9% of exports on a trend basis. Why?

Another question arises: the Italy of cheeses boasts many records, from quality to biodiversity to the many indications of origin that together certify history, craftsmanship and tradition. How can Italy conquer China? 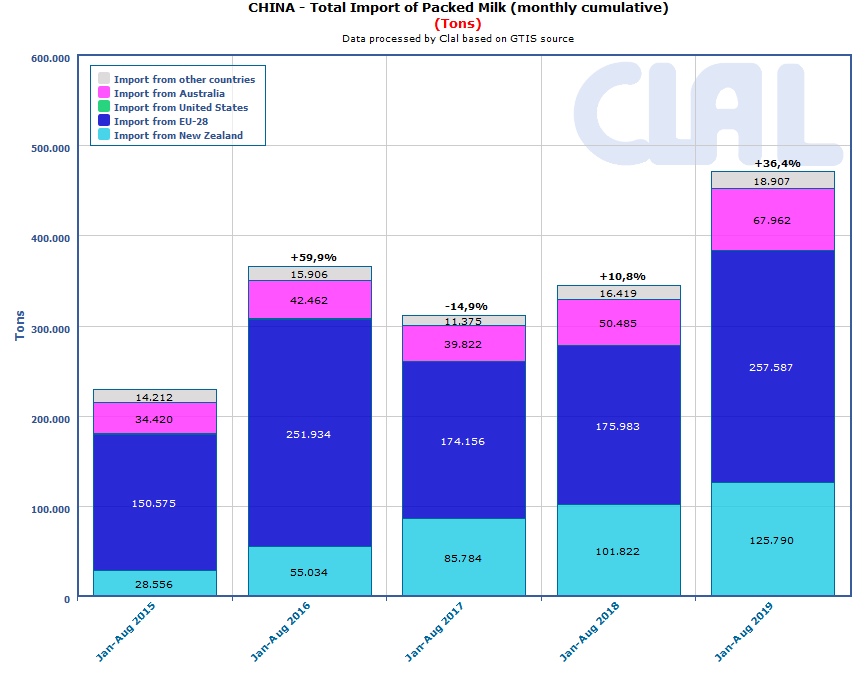