Dairy supply, demand and prices in Oceania and South America [The Austral - May 2021]

Oceania: Fonterra has invested in a new foodservice application centre in China

Comparing the price of 4,17 €/kgMS to the prices of European milk is obtained:

New Zealand milk volumes in March were 9.8% more than last year on a volume basis. Recent rain on the North island has helped maintain pasture conditions. The South Island remains quite dry and some dairy producers were prompted to dry their cows a bit earlier than normal as the season ends. In March 2021, New Zealand dairy exports grew by +22.2%, with significant increases in China, towards which exports of Butter, Cream and Cheese more than doubled.

As of 2024 dairy export to China will be duty-free

Under the upgraded FTA, all New Zealand dairy exports to China will be duty-free as of January 1, 2024.

Fonterra has invested in a new food service application centre in Guangzhou where it tests dairy innovations with its Chinese customers. Dairy products with added value are highly appreciated by the Chinese market. 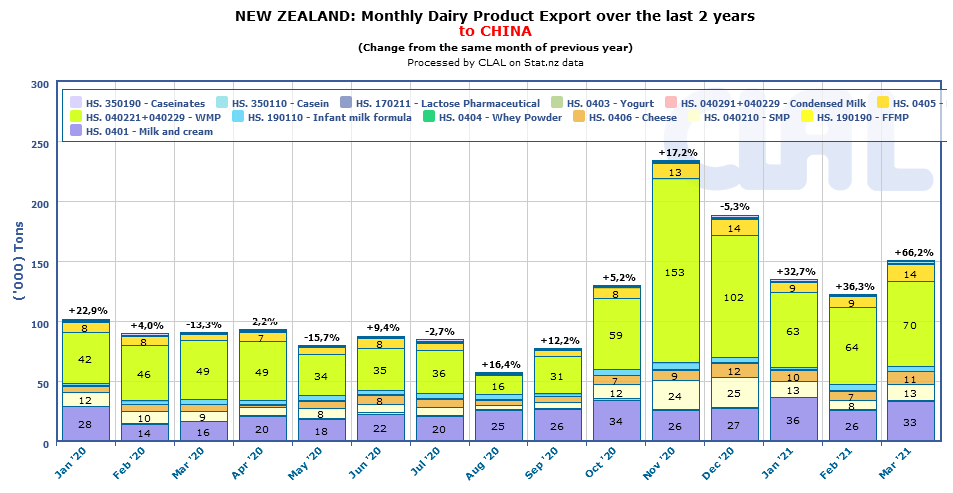 New Zealand milk production is near the seasonal low, as the end of the season on May 31 moves closer, and upward dairy commodity price pressure is expected.

In the North Island areas of Waikato and Taranaki there is a greater concentration of Butter plants, and the increase in milk production in recent months in these areas is absorbed by a greater production of Butter. The addition of butter to GDT volumes resulted in weaker butter prices.

The price of Cheddar is also decreasing. Price quotes from the U.S. are often lower than from Oceania. This has imposed some downward pressure on Oceania Cheddar pricing.

South America: some pressure on margins for dairy operators

Brazilian milk producers are experiencing an unfavorable scenario, due to the sharp increase in production costs and reductions in the price of milk. However, the weekly trend in Corn and Soybean prices signals a slight decrease in progress.

Although some locations in Brazil have been hit by the rains, the water deficit situation remains, with a negative impact on soil moisture.

Corn and Soybean prices in Argentina are at historical highs

Milk Powders prices are decreasing. After a period of increased demand for immediate needs, the SMP trading activities have slowed in the Southern Cone (Chile, Argentina, Uruguay and Paraguay). There is also a slight decline in demand for WMP. Manufacturers’ inventory levels are limited. 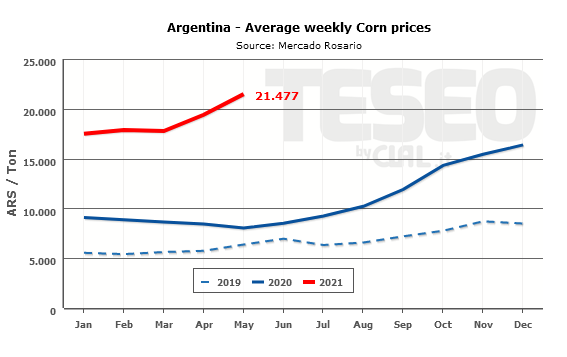