Supply, demand and prices in Oceania and South America [The Austral - April 2021]

Australia continued negotiations with the EU concerning terms of a possible free trade agreement. Under consideration is the extent to which Australian sustainability standards are consistent with those in the EU. Negotiations are scheduled to resume in June.

In New Zealand, the production season will end on May 31st. Several operators estimate an increase in production between 1% and 1.5% for the current season. Currently, the production of New Zealand milk in the period June 2020 – February 2021 is increasing by + 1.0%.

In Oceania, the demand for Dairy products from China, Japan and other Southeast Asian countries is particularly active, especially for Butter and WMP. Many Buyers prefer to buy products from Oceania over European ones, despite the higher price.
Strong Asian demand, coupled with declining seasonal production, is supporting the prices of different dairy products.

The latest GDT event on April 20 shows signs of stability, recording an average price change of -0.1% compared to the previous event. Positive changes for Cheddar (+ 1.2%) and WMP (+ 0.4%), while Butter recorded a slight decrease. SMP prices are unchanged. 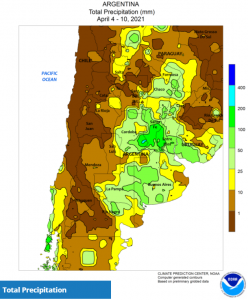 In South America, between the end of March and the first two weeks of April, various rainfall contributed to a better quality of grass in the pastures. In Brazil, drier climatic conditions are worrying farmers about the second Corn crop.
The SMN (Servicio Meteorológico Nacional) weather forecast for the April-June quarter in South America estimates lower than normal rainfall and higher than normal temperatures.

Soybean prices remain high. According to some operators in the sector, the global demand for Soy will continue to grow. Rising feed costs and operating costs in some South American areas could put pressure on farmers’ margins.

The milk powder market in South America remains stable, with less interest in exports. The prices of the WMP and SMP are slightly up, respectively + 1.0% and + 0.8% compared to the previous quotation. 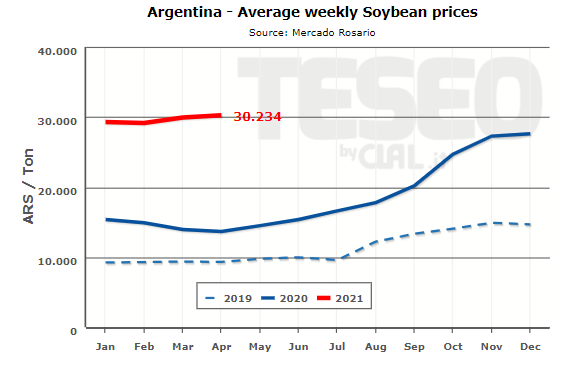