Global Corn production for 2017-18 (season started on September 1st) is expected to be 1032.63 Mio t, slightly down (-0.1%) compared to August estimates. Expected increases in the United States, Argentina and Mexico are offset by lower production in the European Union and Ukraine.

The U.S. crop is estimated at 360.30 Mio t (+0.2%). Corn used for ethanol is projected down 25 million bushels, based on observed usage during 2016-17 and expectations of lower exports. With supply increasing and use falling, Corn ending stocks are +2.7% from last month. Global Corn stocks are lower from the last 3 seasons, with a significant reduction in China (-19.8%), the country with the highest share of stocks.

Export is projected higher for Ukraine (+2.3%), the fourth largest Corn exporter, after the U.S., Brazil and Argentina. Ukraine’s relatively large exportable supplies and logistical advantages are expected to fill demand for imported Corn in the EU.

In China, world’s largest Soybean importer, imports are expected to increase further: +1.06% from last month’s estimates, +3.26% from the previous season. 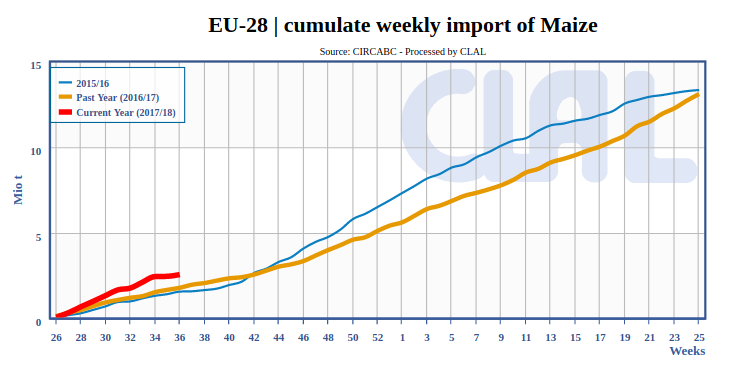