BUTTER (82%): mixed prices with substantial declines on the upper end of the range, caused by the lack of export opportunities to Russia from Australia; on the other hand New Zealand butter makers are receiving numerous inquiries from Russian buyers, and there are also discussions and negotiations to further expand the list of New Zealand plants approved to export to Russia; export demand is mixed with some increased interest coming from the Middle East and North Africa.

CHEDDAR CHEESE: price declines, pressured by the increases to global supplies caused by the Russian ban; production is increasing as milk flows expand.

SMP: prices decreased this period as concerns of expanded global supplies weighed on prices; production is increasing as milk flows expand; ucertainty on the market slows down exports.

WMP: price range has narrowed, and possibly a price floor is being established; manufacturers are closely monitoring the narrowing price advantage of SMP and butter over whole milk powder for possible production shifts, in order to produce the commodity of highest return.

The Russian ban generates uncertainty in the global market and, combined with increased milk production, puts pressure on prices.
China’s imports of dairy products are still above year ago levels: this favors the largest supplier of China, New Zealand, which, however, is not among the countries banned by Russia. 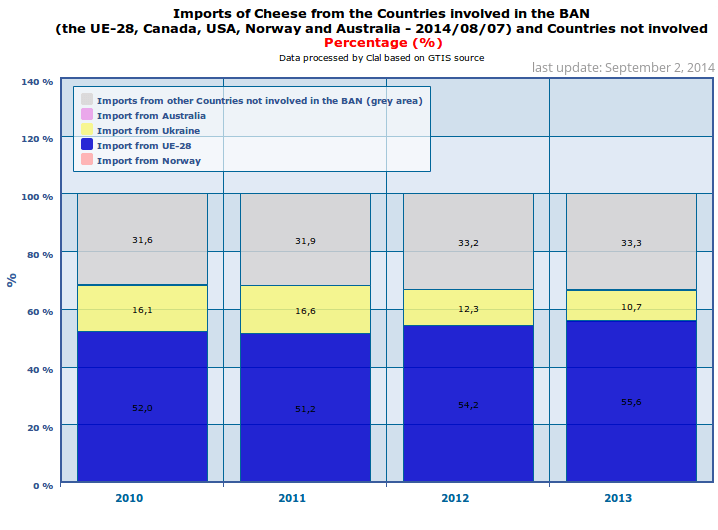 CLAL.it - Russia: Imports of Cheese from the Countries involved in the BAN and Countries not involved