The relevance of PDO cheeses for the Italian dairy sector

Cheeses with PDO (Protected Designation of Origin) have a strategic importance for the Italian dairy sector. 51% of total Italian cow’s milk is processed into PDO cheeses and their volume of production is the highest among all PDO and PGI (Protected Geographical Indication) cheeses.

The use of a geographical name to designate a cheese of origin of a region that carries such a name is a very ancient tradition in Italy and has developed over time.

In 2013 total production of cow’s milk cheeses was over 416,000 tons and two of them, Grana Padano and Parmigiano Reggiano, represent well over 100,000 tons per year. Gorgonzola has the third most relevant quantity with 50,000 tons produced, followed by Asiago with 22,000 tons, Taleggio 8.600 tons, Montasio and Provolone Valpadana with 6,000 tons. Cheeses obtained from other milks are also important. This is the case of Mozzarella di Bufala Campana obtained from buffalo’s milk with a production of 37,000 tons while Pecorino Romano, obtained from ewe’s milk, results in almost 25,000 tons. In general the production trends in the period from January to May 2014 compared to the same period of last year are increasing, while Pecorino Romano is decreasing by 4.25%. Exports are continuously increasing. 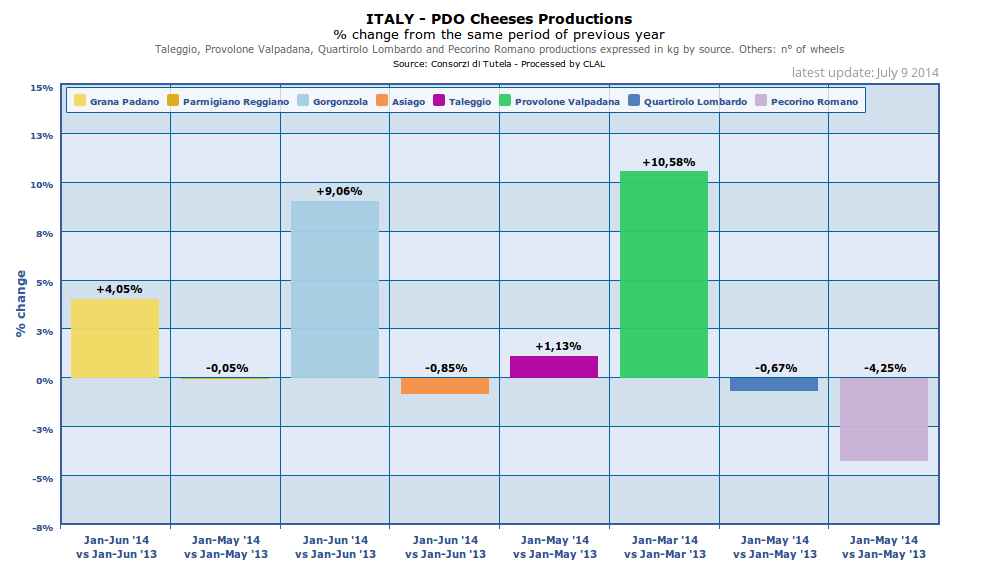