Australia is nearing the end of the milk season, recording in March 2018 an increase by +2.5% from March 2017. July 2017-March 2018 milk production was +3.4% over one year earlier. In Victoria, the most productive region accounting for 64.8% of Australian milk production, milk production increased by 3.8% over the same period a year ago.

Demand for hay in Northern Australia is higher, due to seasonally cooler temperatures. New season hay is being snapped up from milk producers from New South Wales and Victoria, who are competing with exporters for that hay. That has led to some price firming.

The dairy season in New Zealand will end on May 31st. Milk production in the first 10 months was -0.3% than in the previous season. Recent better than expected milk production will boost the seasonal total, due to improvement in pasture conditions. Nevertheless, seasonal production will be lower than last season.

SMP prices also strengthened. Manufacturers have sufficient inventories to meet the demand in a period of low seasonal production.

WMP prices are slightly lower. At this time of the year WMP is the priority milk destination and some manufacturers are working to keep pace with contract obligations.

Cheddar continues to bring strong returns. Prices firmed again, reaching a 2018 peak. Many cheese makers would like to have more milk available, so stocks are being drawn down to meet obligations. 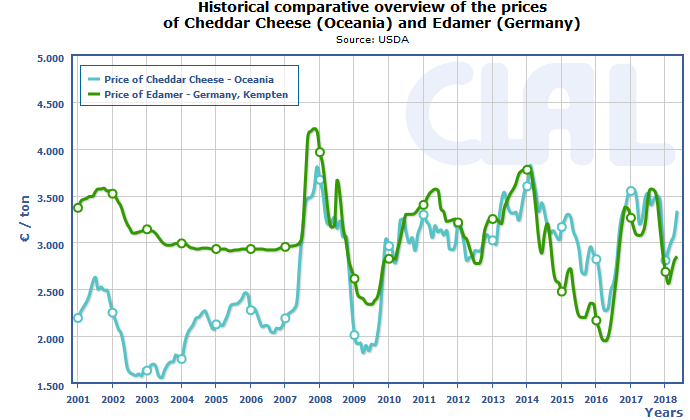 CLAL.it – Cheddar price in Oceania and Edamer price in Germany