Home › Cheese › US President Trump increasing import tariffs: would it be a crisis for Italian Cheeses? [Interview]

US President Trump increasing import tariffs: would it be a crisis for Italian Cheeses? [Interview]

Attilio Zanetti, vice president of the European Dairy Association, the European federation based in Brussels that brings together all the European dairy associations of the EU Member States, the italian Assolatte included, confides his concerns to us about the commercial tensions between the European Union, United States and China that are likely to hit the Italian dairy sector heavily.

Zanetti spa is the largest exporter of Grana Padano and Parmigiano Reggiano. While the threat of imposing duties on Italian cheeses by President Trump seems increasingly real, which is the state of play and what are the risks for the sector?

“On April the 9th, the Office of the United States Trade Representative released a list of European products that could be subject to additional duties following the EU-US dispute related to the Boeing-Airbus cases. The list includes – among others – butter, yogurt and some cheeses. Those currently involved are Asiago, Fontina, Mozzarella di Bufala Campana, Pecorini, Taleggio.

The USA is the first extra-EU market for Italian cheeses

The application of additional duties would represent a severe blow to the exports of Italian dairy products to the USA, the first extra-EU market for Italian cheeses, which covers 10% of the total value of our export. In 2018 Italian companies exported more than 31 million kilos of cheese, 44 thousand kilos of butter and 19 thousand kilos of fermented milks, for a total value of more than 273 million euros. The export of cheese to the USA is today subject to average high duties (ranging from 6 to 25%) and few of our products are exempt from tariff barriers.

Like Pecorino which is, in fact, one of the products affected by the toll payment. If the US administration’s initiative were to be confirmed, we would certainly record a drop in exports of Italian pecorino, with lasting effects on the crisis of the Pecorino Romano supply chain, which was born precisely from the combination of an excess supply and a drastic decrease in the US demand (-40% last year), the largest foreign market for this product. For the time being, in the US black list there are no Gorgonzola, Grana Padano and Parmigiano Reggiano, but the latest events show that the entire dairy sector is at risk.

Considering the unpredictability of President Trump’s decisions, we must prepare for the worst

Assolatte met with Italian and European institutions, I have been in Rome to speak with Minister of Agricolture Gian Marco Centinaio and in Brussels to invest the European Commission in the matter, but unfortunately there are no positive prospects. Considering the unpredictability of President Trump’s decisions and his industrial and commercial policy choices, related not only to dairy but to wider issues such as the reform of the World Trade Organization and relations with China, unfortunately we must prepare for the worst.”

It looks like a perfect picture for Parmesan producers…

“For sure, the perfect storm for us, for Parmesan producers is an unmissable opportunity they are not willing to let it go. The Consortium of Common Food Names (CCFN), an organization that represents US dairy producers, and the National Milk Producers Federation (NMPF) have mobilized to ask Trump not only to effectively apply the proposed duties, but also to consider the hypothesis of barring the import of European cheeses. According to the Consortium of Food name the EU, simply through the protection it grants to its own Geographical Indication, is effectively blocking the EU market to American producers, whereas European producers have instead a strong advantage on the US market (as shown, according to them, from the trade deficit).

The theses of our American competitors are naturally imaginative. Due to the principle of territoriality, to be able to export and market products – in the European Union as well as in the United States – we are all obliged to respect the rules of the legal system in which we operate, without violating the rights of third parties or imposing our rules. In order to export to the United States, Italian producers are required to comply with American regulations without questioning their system, and the same is asked to Americans who want to export in Europe, while they are disputing the entire system of geographical indications. In addition, I would add that the Italian Consortium, in full compliance with the rules imposed by the United States Statutes, and the WTO system, have requested and obtained in the US, in accordance with local legislation, the protection of names registering them as “trade marks”.

So Grana Padano, Parmigiano Reggiano, Pecorino Romano are therefore registered as trademarks in the United States. Unfortunately other cheeses, such as Gorgonzola, Asiago, Fontina, just to name a few, have not proceeded to register, and therefore these names are used freely and legally by US producers for name locally produced copies.

The American consortium complains of not being able to export the aforementioned cheeses to the European Union, which is absolutely not true. The importation of American cheeses into the EU is possible and legitimate, what is not legitimate is the use of denominations that in the European Union are protected in accordance with our laws.

The arguments of the Consortium of food name are therefore completely groundless, but risk being accepted by the Trump administration for electoral reasons. It would be a serious damage to our industry, but also to American consumers.” 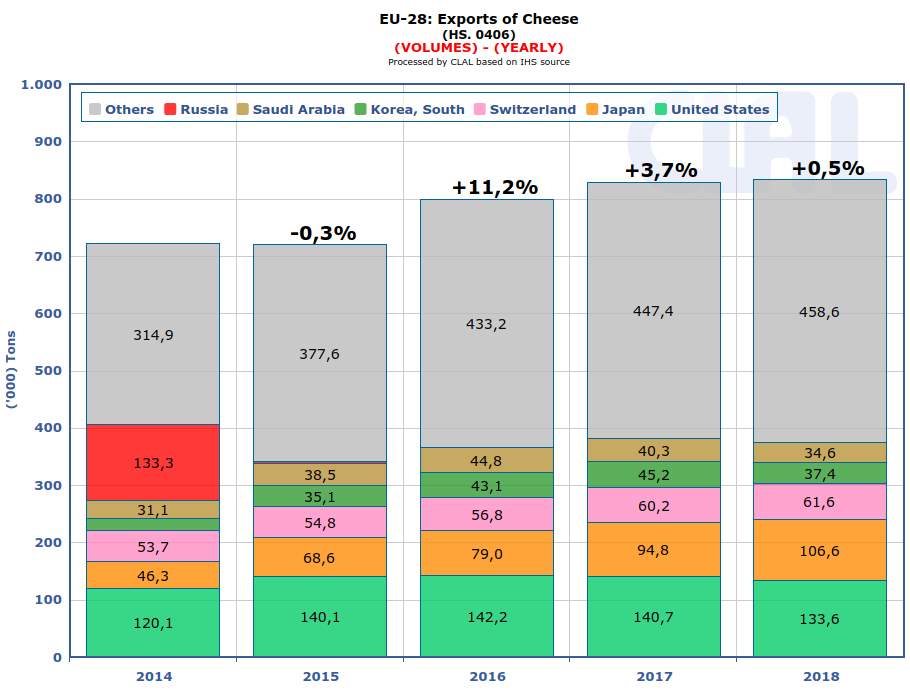 CLAL.it – The US is the first export market for EU Cheeses